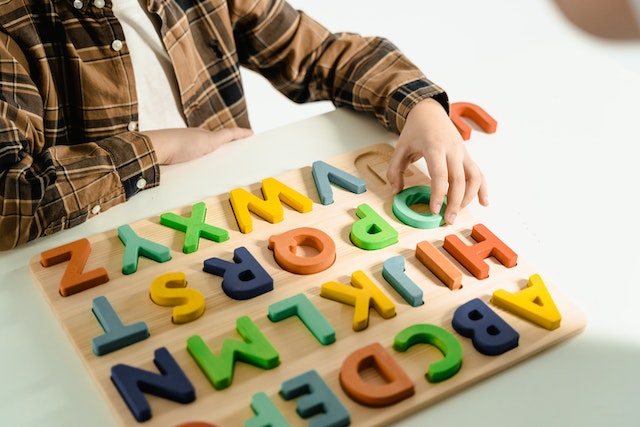 Alphabet knowledge is the foundation for children’s ability to read and write the English language and is critical for academic development. Alphabet knowledge involves recognizing letters, saying their names, associating the names with their corresponding sounds and, to some extent, writing on paper or other material.

Several strategies can be used in the classroom to help children develop alphabet knowledge. Below are five of them.

Incorporating music in the form of songs is an effective strategy used in the instruction of various subject areas, and alphabet knowledge is no exception. Music makes activities fun, motivates children to learn and promotes information retention. In addition to the Alphabet Song—sung to the tune of Twinkle, Twinkle Little Star—there are many other alphabet songs that approach teaching the alphabet in a fun and diverse ways. Children in a daycare setting especially benefit from songs that highlight letters.

Alphabet games are a fun and active way to expose children to letters. Games like I Spy can visually and verbally stimulate children and, over time, develop their alphabet knowledge. In I Spy, once a letter is introduced, one child will spy that letter from a group of letters and another will find the letter. Once the student locates the letter, the class will then repeatedly make the letter sounds in hushed and loud tones.

Children love doing arts and crafts. So why not integrate alphabet lessons into art and craft lessons? In early learning environments, children cut out and colour letters of the alphabet as they are taught and include them in an alphabet scrapbook. Both lowercase and uppercase letters are included as well as photos of objects that begin with the letters taught. These interactive lessons produce effective results as children require constant engagement.

Alphabet books are great resources to teach alphabet knowledge. Many books like Dr. Seuss’ ABC and Keith Baker’s LMNO Peas list the letters of the alphabet in lowercase and uppercase forms, with corresponding colourful photos, information and fun activities. As books are read, students will become better at recognizing, naming and sounding letters.

5. Creating an alphabet board

Alphabet boards are usually a part of a teacher’s toolkit and are found in most preschool classrooms. As letters are introduced, the teacher and students can affix letters and pictures beginning with the corresponding letters to boards to create an alphabet display. The active use of alphabet boards during lessons contributes to students’ intake of the alphabet lesson, while the presence of the board helps students passively identify and memorize the letters.

At Rothewood Academy, we understand and appreciate the importance of early learning of the alphabet. It is a crucial building block for academic success. Our passionate and well-trained teachers are ready to begin setting the alphabet foundation for your little ones’ journey to success. Contact us via our online form if you have any questions regarding our institution or schedule a tour today.

Preschool and daycare, Rothewood Academy's goal is to empower a community
of learners who will change the world through passion and selflessness. Learn More

RICHMOND, BC
RICHMOND, BC: GARDEN CITY
SOUTH SURREY, BC
WHITE ROCK, BC